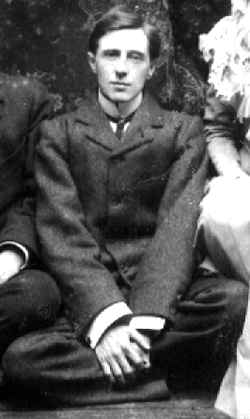 Thomas Breakwell (1872–1902) was the first Englishmen to become a Bahá’í and the first to make the pilgrimage to ‘Akká. He was taught the religion by May Bolles (later to become May Maxwell) in the summer of 1901, and travelled to meet ‘Abdu’l-Bahá in ‘Akká that same summer. At ‘Abdu’l-Bahá’s request, Breakwell took up permanent residence in Paris, where he worked enthusiastically to teach the religion and help develop the Paris Bahá’í community. Thomas Breakwell died of tuberculosis on 13 June 1902, when he was only 30 years old, barely a year after joining the Bahá’í Faith.

From the Bahá’í perspective, the significance of Thomas Breakwell’s life lies not in his material or professional accomplishments, but rather in his spiritual capacity. His purity, detachment and devotion were noted by a number of those who met him, most significantly and most keenly by ‘Abdu’l-Bahá himself. In 1955 Shoghi Effendi, the Guardian of the Bahá’í Faith, posthumously described Breakwell as one of the “three luminaries of the Irish, English and Scottish Bahá’í communities”.

While on a steamer bound for France, Thomas Breakwell met a woman by the last name of Milner who was acquainted with the religion. Seeing Breakwell’s intense interest in spiritual subjects, Mrs. Milner took Breakwell to see her acquaintance May Bolles. At their first meeting in Paris, May Bolles did not mention the religion or discuss any of its teachings.

According to May Bolles, when Breakwell returned the next day, he told her that he had experienced a profoundly spiritual moment. While walking after the previous day’s meeting, Breakwell told her that, “…suddenly a wind struck me and whirled around me, and in that wind a voice said, with an indescribable sweetness and penetration, ‘Christ has come again! Christ has come again!’ ”  When Breakwell asked May if she thought him insane, she replied that he was not. In fact, he was becoming sane!

Over the next three days, May explained the history, principles and laws of the Bahá’í Faith and gave him materials to read. On hearing of `Abdu’l-Bahá, Breakwell decided to cancel his existing travel plans and to request permission to see him.

He sat down and wrote a brief but poignant message:

My Lord, I believe, forgive me.
Thy servant, Thomas Breakwell.

There’s a fascinating back story to Breakwell’s declaration. May had wanted to accompany her mother on a trip to Brittany but ‘Abdu’l-Bahá had instructed May that she should not leave Paris for any reason. Before Breakwell’s letter of declaration could have reached ‘Akka, a cable came for May that read: “You may leave Paris at any time. Abbas.”

Thomas Breakwell’s request to go to ‘Akká was granted and he and another new Bahá’í, Herbert Hopper, undertook the journey together. When he and Herbert Hopper arrived in the Prison of ‘Akka, they were ushered into a spacious room, at one end of which stood a group of men in oriental garb. Herbert Hopper’s face became irradiated with the joy of instant recognition, but Breakwell discerned no one in particular among these men. Feeling suddenly ill and weak, he seated himself near a table, with a sense of crushing defeat. Wild and desperate thoughts rushed through his mind, his first great test, for without such tests the soul will never be unveiled.

Sitting thus he bitterly lamented: Why had he come here? Why had he abandoned his projected journey and come to this remote prison, seeking – he knew not what? Sorrow and despair filled his heart, when suddenly a door opened, and in that opening he beheld what seemed to him the rising Sun. So brilliant was this orb, so intense the light that he sprang to his feet and saw approaching him out of this dazzling splendor the form of ‘Abdu’l-Bahá.

He seldom mentioned this experience which transformed and transfigured his life. In the course of his interview with the Master, he told Him briefly of his position in the cotton mills of the South, his large salary, his responsibility, and his sudden conviction of sin, for he said, “These mills are run on child labor.” The Master looked at him gravely and sadly for a while, and then said, “Cable your resignation.” Relieved of a crushing burden, Breakwell eagerly obeyed, and with one blow cut all his bridges behind him.

The visa Breakwell and Hooper had been able to secure only allowed them to stay in Akká for two days. Prior to Breakwell leaving, `Abdu’l-Bahá requested that he settle in Paris.

Upon returning to Paris, Breakwell became a leader in the local Bahá’í community. May Bolles relates that he demonstrated exemplary courtesy, intense fervor, eloquence, sympathy and genuine love, among other attributes. During the period, Breakwell regularly corresponded with `Abdu’l-Bahá ‘s secretary and translator Yúnis Khán. Through these letters, Breakwell and `Abdu’l-Bahá remained in contact.

Breakwell began living a frugal lifestyle in a cheap and distant part of Paris.  He walked miles to the meetings and to the homes of friends to save his cab fare and make his contribution to the diffusion of the teachings.  He became the first western Bahá’í to give the Huqúqu’lláh, despite his own uncertain financial future.

During this time his parents arrived to take him home and restore him to his family’s religion and disowned him when they failed. However weeks later his father converted to the Bahá’í Faith.

During the period of 1901-02, Thomas Breakwell fell ill with tuberculosis. In his letters to ‘Abdu’l-Bahá, Breakwell demonstrates a radiant acquiescence regarding his condition, and is not only content with his suffering, but actually desires greater pain, stating, “Suffering is a heady wine; I am prepared to receive that bounty which is the greatest of all; torments of the flesh have enabled me to draw much nearer to my Lord.”

In another letter he wrote:

I ask God for calamity; I desire undiminishing pain. I long for suffering without respite; I yearn for enduring agony and torment so that I may not for a moment neglect the mention of my Beloved.

Even as death approached, Breakwell was teaching the Bahá’í Faith to other patients in the tuberculosis ward where he was confined. Thomas Breakwell died at the age of 30, only a year after becoming a Bahá’í.

The grave was leased for only five years and no surviving members of his family kept up the payments on the plot. His bones were gathered in the cemetery’s charnel house. After some years the plot was vacant again and the National Assembly of France applied for permission to erect a permanent monument to Thomas on the site. The site has become a focal point of pilgrimage. The Universal House of Justice of the Bahá’í Faith, the modern head of the religion, has encouraged the French Bahá’í community to continue its efforts to retrieve Thomas’s remains from the charnel house and have them returned to their original grave.

Heartbroken at the passing of Thomas Breakwell, although miraculously no-one had told him it had happened, ‘Abdu’l-Bahá revealed the most moving and inspiring Tablet, telling his translator to translate it so that all who read it would weep.

Grieve thou not over the ascension of my beloved Breakwell, for he hath risen unto a rose garden of splendours within the Abha Paradise, sheltered by the mercy of his mighty Lord, and he is crying at the top of his voice: ‘O that my people could know how graciously my Lord hath forgiven me, and made me to be of those who have attained His Presence!’

O Breakwell, O my dear one!
Where now is thy fair face? Where is thy fluent tongue? Where thy clear brow? Where thy bright comeliness?

O Breakwell, O my dear one!
Where is thy fire, blazing with God’s love? Where is thy rapture at His holy breaths? Where are thy praises, lifted unto Him? Where is thy rising up to serve His Cause?

O Breakwell, O my dear one!
Where are thy beauteous eyes? Thy smiling lips? The princely cheek? The graceful form?

O Breakwell, O my dear one!
Thou hast quit this earthly world and risen upward to the Kingdom, thou hast reached unto the grace of the invisible realm, and offered thyself at the threshold of its Lord.

O Breakwell, O my dear one!
Thou hast left the lamp that was thy body here, the glass that was thy human form, thy earthy elements, thy way of life below.

O Breakwell, O my dear one!
Thou hast lit a flame within the lamp of the Company on high, thou hast set foot in the Abha Paradise, thou hast found a shelter in the shadow of the Blessed Tree, thou hast attained His meeting in the haven of Heaven.

O Breakwell, O my dear one!
Thou art now a bird of Heaven, thou hast quit thine earthly nest, and soared away to a garden of holiness in the kingdom of thy Lord. Thou hast risen to a station filled with light.

O Breakwell, O my dear one!
Thy song is even as birdsong now, thou pourest forth verses as to the mercy of thy Lord; of Him Who forgiveth ever, thou wert a thankful servant, wherefore hast thou entered into exceeding bliss.

O Breakwell, O my dear one!
Thy Lord hath verily singled thee out for His love, and hath led thee into His precincts of holiness, and made thee to enter the garden of those who are His close companions, and hath blessed thee with beholding His beauty.

O Breakwell, O my dear one!
Thou hast won eternal life, and the bounty that faileth never, and a life to please thee well, and plenteous grace.

O Breakwell, O my dear one!
Thou art become a star in the supernal sky, and a lamp amid the angels of high Heaven; a living spirit in the most exalted Kingdom, throned in eternity.

O Breakwell, O my dear one!
I ask of God to draw thee ever closer, hold thee ever faster; to rejoice thy heart with nearness to His presence, to fill thee with light and still more light, to grant thee still more beauty, and to bestow upon thee power and great glory.

O Breakwell, O my dear one!
At all times do I call thee to mind. I shall never forget thee. I pray for thee by day, by night; I see thee plain before me, as if in open day.