Newsletter on the Feast!

Welcome to the Month of Beauty 172!

Hope you’re enjoying this Ridvan, the King of Festivals!

In this issue – The Feast

5 Things Anyone Can Do to Revive Community Spirits at Feast

19 Day Feast and Why it’s Important

Checklist to Ensure the 19 Day Feast is Held Properly

Programs for Will, Power, Questions and Loftiness

Children of the Feast

‘Abdu’l-Bahá was born on the same night that the Bab declared His Mission in Shiraz on 22 May 1844, so on that day in 1906 it was about the Bab, His work and message, that He spoke. For the occasion over two hundred guests were to dine at the Master’s table. Since dawn He had been busy helping with the work involved, Himself kneading dough to be put in the ovens, ‘in gay spirits, inspiring, uplifting, cheering all His helpers‘. Later He ‘assisted in passing the platters…the rice…the lamb…the fruits of the region (of such large size, such colour, and such fragrance as only the sunshine of the East produces and paints). Moving among His two hundred guests, He spoke to them as He served them, such Divine words of love and spiritual import. (Honnold, Annamarie, Vignettes from the Life of ‘Abdu’l-Bahá, p. 49)

Of the guests who remained to lunch or dinner, the Master would often hold out His hand to the humblest or most diffident, lead them into the dining-room, seat him or her at His right hand, smile and talk until all embarrassment had passed away, and the guest felt as though all uneasiness had changed into the atmosphere of a calm and happy home. (Lady Blomfield, The Chosen Highway)

During this second stay in Chicago, ‘Abdu’l-Bahá chose to stay in Corrine True’s home for a day or two before moving to a hotel. When He arrived with His secretaries, Corrine serve them all tea. Unfortunately, it was a type of tea that Persians don’t like, and some of them remarked that “there was a better tea”. But the Master drank it anyway, saying, “This tea is very good because it is been prepared with love.” (Earl Redman, ‘Abdu’l-Bahá in Their Midst, p. 192)

Julia Gundy, an early pilgrim, described a beautiful supper at which many friends were welcomed by the Master Himself in Akka. He passed out napkins, embraced and found plates for each. All were individually anointed with attar of rose. He served pilau, a Persian rice dish, to each guest. There were also oranges and rice pudding. ‘Throughout the supper, which was very simple in its character and appointment, ‘Abdu’l-Bahá was the Servant of the believers. This was indeed a spiritual feast where Love reigned. The whole atmosphere was Love, Joy, and Peace. (Honnold, Annamarie, Vignettes from the Life of ‘Abdu’l-Bahá)

He has been known to go into the kitchen and prepare a meal for His guests. He never failed in such small attentions as seeing that the room where His visitors were entertained contained every possible comfort, though He paid no attention to His own comfort. (Howard Colby Ives, Portals to Freedom, p. 240)

Mary Bolles (Maxwell) took an early pilgrimage to the prison city. She heard that the food man eats is of no importance, as its effect endures but a short time. But the food of the spirit is life to the soul and its effects endure eternally. She heard ‘Abdu’l-Bahá tell the touching ’story of the hermit‘. Bahá’u’lláh ‘was traveling from one place to another with His followers’ and ‘He passed through a lonely country where, at some little distance from the highway, a hermit lived alone in a cave. He was a holy man, and having heard that Our Lord, Bahá’u’lláh, would pass that way, he watched eagerly for His approach. When the Manifestation arrived at that spot the hermit knelt down and kissed the dust before His feet and said to Him: “Oh, my Lord, I am a poor man living alone in a cave nearby; but henceforth I shall account myself the happiest of mortals if Thou wilt but come for a moment to my cave and bless it by Thy Presence.” Then Bahá’u’lláh told the man that He would come, not for a moment but for three days, and He bade His followers cast their tents, and await His return. The poor man was so overcome with joy and with gratitude that he was speechless, and led the way in humble silence to his lowly dwelling in a rock. There the Glorious One sat with him, talking to him and teaching him, and toward evening the man bethought himself that he had nothing to offer his great Guest but some dry meat and some dark bread, and water from a spring nearby. Not knowing what to do he threw himself at the feet of his Lord and confessed his dilemma. Bahá’u’lláh comforted him and by a word bade him fetch the meat and bread and water; then the Lord of the universe partook of this frugal repast with joy and fragrance as though it had been a banquet, and during the three days of His visit they ate only of this food which seemed to the poor hermit the most delicious he had ever eaten. Bahá’u’lláh declared that He had never been more nobly entertained nor received greater hospitality and love. “This,” explained the Master, when He had finished the story, shows us how little man requires when he is nourished by the sweetness of all foods – the love of God.”’ (Honnold, Annamarie, Vignettes from the Life of ‘Abdu’l-Bahá)

To say before starting the Feast

Each one of you must think how to make happy and pleased the other members of your Assembly, and each one must consider all those who are present as better and greater than himself, and each one must consider himself less than the rest. Know their station as high, and think of your own station as low. Should you act and live according to these behests, know verily, of a certainty, that that Feast is the Heavenly Food. That Supper is the “Lord’s Supper”! I am the Servant of that gathering. (‘Abdu’l-Bahá, The Compilation of Compilations vol. I, p. 429)

This month I’d like to feature a Canadian youth group called the Dapper Rappers with musicians Nadim Merrikh, Sahba Shahmohamadloo, Shayan Majidy and Blair Cameron. They’ve put together some really creative hip-hop music which would be particularly inspiring for Junior Youth classes; as they learn about role models of the Faith; and see ways they can be the change in the world. It’s hard to pick a favorite, since I like everything they do, particular the raps telling the stories of several of the Hands of the Cause; so I recommend you listen to all of them; bookmark them and share them widely!

The video that won the top prize at the international Tony Blair Faith Foundation’s Faith Shorts awards is “Be the Change”. This contest is open to youth 14 to 18, who submit videos inspired by their faith. The producer of this film, Nadim Merrikh, was only 15 when he made this award-winning video!

The next video show junior youth gathering together in groups around the world to explore how to be agents of positive action and service in their communities. This video celebrates the inherent power in this special age-group, showing how they can rise to “Heights of Glory”.

Watch and listen to Biographies in Rap for the following Hands of the Cause:

The Bright Glass of the Heart 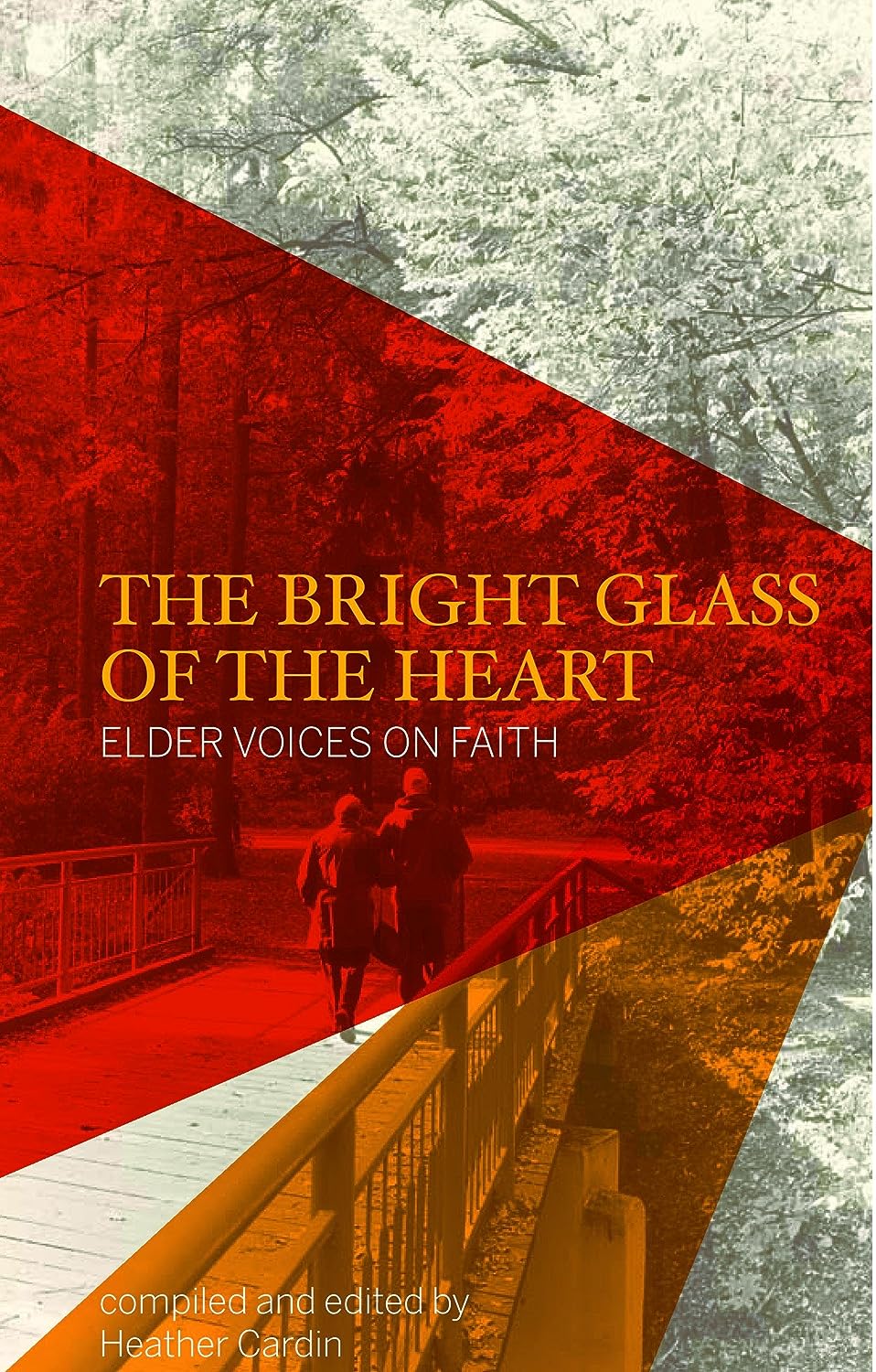 While we’re on the theme of early Bahá’ís who made a difference in our communities, I’d like to introduce you to a book by Heather Cardin, whose book The Bright Glass of the Heart gives us an inspiring collection of personal stories of elder Bahá’ís whose commitment and service laid the foundations of the Bahá’í Faith around the world.

We are living the future that the elders envisioned when they, themselves, were young. What was that vision? What did they do to make it a reality? What made them adopt a new religion, perhaps in the face of opposition from family and friends, and spend the rest their lives serving it? What insights can they offer to inspire rising generations? These are the questions Heather Cardin asked elder Bahá’ís. Her book gives us the authentic, powerful voices of our elders, ordinary people looking back on their many years as Bahá’ís helping lay the foundation of the Faith and looking forward to their role in the 21st century.

The book title comes from a quote of ‘Abdu’l-Bahá, where he tells us:

When the scattering splendours of this light do beat against the bright glass of the heart, the heart’s purity maketh the beams to blaze out even stronger than before, and to shine in glory on the minds and souls of men. (‘Abdu’l-Bahá, The Compilation of Compilations vol. I, p. 193)

These stories show the effect of this quote in action!

For more information; or to buy the book

This month’s featured coach is Susheel Croft, an accredited dietitian and nutritionist with 30 year’s experience. She is a dietitian with a difference, in that she uses the writings and other secret texts along with NLP, Hypnosis, ayurvedic medicine, reconnective healing, reiki, art, Virtues Project strategies, hands-on energy healing and other techniques in her practice. She describes herself as an “emotional blockage buster and healing coach”!

Sushel is offering 50% off an “inner spring cleaning” to help you clear out all your trapped emotions and excess baggage; so you can experience your ultimate well-being, feel contented, loved, healthy and abundant.

To hear her talk about her services

To visit her homepage

To find her on Linkedin

Are you responsible for this month’s Feast Program? Don’t know where to start?

I highly recommend Wendy Scott’s Feast packages. Each month she chooses Writings designed to conform to the attribute of God the month is named after and to inspire us to service and teaching. She has tried to include prayers and Writings from each of the Central Figures, and part of a talk of the Master. Her aim is to find unusual Writings you might not hear all the time to make it even more interesting.

She’s made sure that each Feast program is unique, in that the prayers and readings change from month to month.

Each program comes with three writings to be sung by everyone (or listened to) at the beginning, in the middle, and at the end of the spiritual portion. They are specifically chosen to go with the name of the month and contribute to the sense of reverence. She also provides an extra song to end the business portion and start the social portion. This song usually has a lighter tone and is not necessarily related to the name of the month but may go with the season and is designed to inspire us to enjoy fellowship and unity and inspire us for service. All of her programs have all been tested “live,” so you can be confident that they’re paced well.

Her programs come in 3 versions:

I hope you give her program a try at your next Feast! She makes the planning and organizing easy!

To have a look at programs for the next 3 months

I appreciate your welcome message announcing also the month of Glory. Thanks for sharing! Yours in His service, with prayerful thoughts. (Marco Kappenberger)