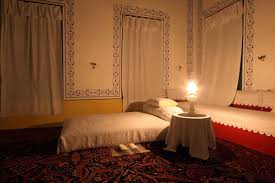 “Remember My days during thy days, and My distress and banishment in this remote prison . . .” (Bahá’u’lláh)

When I was in the deepest despair, remembering traumatic events of my childhood, I came across this quote, which helped to lift me out of my “self”.  I was feeling a lot of “poor me” and “why did this have to happen to me”, and then I had to stop and remember Bahá’u’lláh’s days.

Bahá’u’lláh was born into a wealthy family and was expected to follow his father into an important position in the government of Persia (Iran).  He didn’t want the position or the power.  Instead He wanted to dedicate Himself to helping the oppressed, sick and poor and to champion the cause of justice.

As a result, his life included a series of imprisonments, and banishments.  At one point He was imprisoned for four months in an underground reservoir for a public bath, with its only outlet a single passage down three steep flights of stone steps. He sat with his feet in stocks and a 100-pound iron chain around his neck.  He and His fellow prisoners (150 thieves, murders and highwaymen) huddled in their own bodily wastes, languishing in the pit’s inky gloom, subterranean cold and vermin and stench-ridden atmosphere.

When he was freed from prison, He and His family were banished to Bagdad (Iraq), a 3 month journey on foot over the mountains in the middle of winter without enough food.

“The throat Thou didst accustom to the touch of silk Thou hast, in the end, clasped with strong chains, and the body Thou didst ease with brocades and velvets Thou hast at last subjected to the abasement of a dungeon. Thy decree hath shackled Me with unnumbered fetters, and cast about My neck chains that none can sunder . . . How many the nights during which the weight of chains and fetters allowed Me no rest, and how numerous the days during which peace and tranquility were denied Me . . . Both bread and water . . . they have, for a time, forbidden unto this servant . . . and Thy behest summoned this servant to depart out of Persia, accompanied by a number of frail-bodied men and children of tender age, at this time when the cold is so intense that one cannot even speak, and ice and snow so abundant that it is impossible to move”.  (Shoghi Effendi, God Passes By, p. 109)

He stayed in Bagdad for 7 years, and then was banished again to Constantinople (Turkey), where he stayed for four months, and then was exiled again to Adrianople (Turkey).  Again it was in winter and they didn’t have the proper clothes to protect them from the harsh weather.  In order to drink, they had to light a fire to thaw ice from springs along the way.  He stayed there for four and a half years and then was banished to the prison city of ‘Akká (Israel), to which the worst criminals were sent.  He remained there for the rest of His life (24 years).

He was discredited by His uncle, poisoned by his jealous half-brother and witnessed the death of His son.  He was betrayed by people He trusted, stoned, and isolated from the Believers.  For a time, to protect the Faith from the efforts of His half-brother, He lived as a hermit.  He was the victim of ignorance, injustice, cruelty and fanaticism.

But every crisis was followed by victory, and this, I believe, is what is important to remember.

Although my repressed memories included all the positive and neutral memories too, once they came back I was able to see that like Bahá’u’lláh, there were times in my life that were peaceful, and activities that weren’t abusive.  From anger I learned to find my voice and take action.  From poverty I was protected from materialism and learned to rely on God.  From estrangement I gained knowledge of myself, and through it, knowledge of God. From being silenced, I was protected from backbiting and gossip.

So when you’re feeling in the pit of despair, I urge you to remember not only the negative things that happened to you, and to Bahá’u’lláh, but to remember the victories that came from them as well.

What are your experiences with crisis and victory?  Post your comments here.